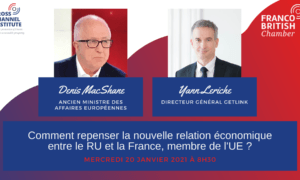 Felix Goodenough and Victoire Bedhome, political consultants, participated at the Cross-Channel Institute event, organised alongside the Franco-British Chamber, at which Denis MacShane, former UK Minister for European Affairs, and Yann Leriche of Getlink Group, expressed their optimism about the future of the economic relationship between France and the UK and the opportunities that will arise on both sides of the Channel in a post-Brexit era.